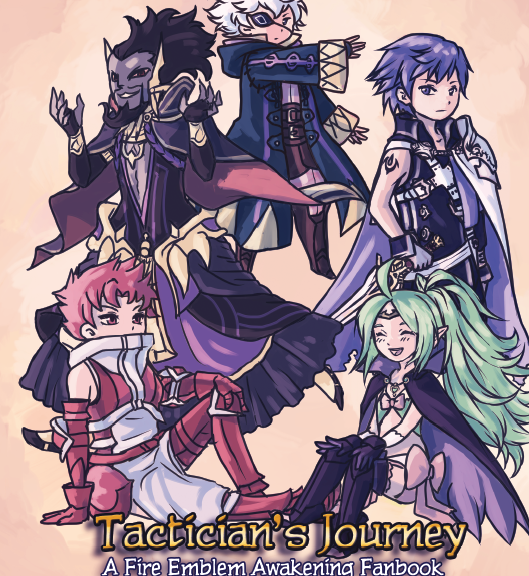 Time for another update! We know we’ve been rather silent on updates (life is not exactly being a sweetheart to me right now), so time to rectify that! Today is all about our past & future plans, sometime later this week we’ll review the work on Binary Soul.

Fire Emblem Awakening Fanbook
Remember the post where we planned out what to do for 2015? Well, aside from NaNoRenO, we also finished the Fire Emblem Fanbook we mentioned way back then! And yes, it is as silly as it looks, we had a lot of fun thinking up gags for this one.

I and Kiki just returned from selling it at Animecon 2015 in the Netherlands. Sadly we won’t do international shipping (the shipping costs could be more than our small and jokey book, which just feels too wrong), but for the Dutchies; let us know if you want one or drop by at Tsunacon to get a copy!

Our website will be updated soon, mainly because we have a new member; Triah, a long time good friend and our musician in the VN-team! You’ll be able to hear her work in Locus Magici :3!

I continued the daily update blog for LoMa after NaNoRenO, but it turns out that this only really works for short-term projects. Since real life decided to interfere (even though we asked so nicely at new year’s if it would behave!), it was hard to find time to work on LoMa every day and too demotivating to write “I can’t work today D:” again and again.

So instead of that, I’m using the blog to keep a list of finished and to-do art-assets and to archive the daily progress logs we keep during NaNoRenO!

I hope this explains some things. Until later and thank you for those who dropped by to say hi; the weekend wouldn’t have been half as fun without you :3.