It’s sure been a while, but with the end of the year at our doorstep, let’s look at what happened in 2014 and what will happen in 2015!

Firstly, although we focused on LoMa the entire year, the tentative release was pushed way waaay back due to several big issues in real life (life, please be kinder to us in 2015). However, progress picked up again a few months ago so we’re back on track! I’m not going to say much about a release-date until I’m 100% sure now, except that I’ll be greatly dissatisfied if we’re not done before coming summer.
So, while Kiki was doing magic with her code, I finished sprites, backgrounds (save for some edits), polished the script and made some cutins (mini-CGs). Turns out that sleep + dividing and finishing work per chapter + no more bachelor and master studies = really good for productivity.

This is the year we’ll finish LoMa~
Do not look at me like that ;_;! I understand many projects have kicked the bucket when they got into delays, but you don’t understand; we are stubborn. We are insane. And we love this project~
On the agenda now are finishing code (putting everything together, adding amazing effects, panning, animations, all that good stuff), the remaining art and then the opening movie and some more polishing since some assets are growing beards by now I..I’m sorry.
In the end though, I can’t blame you for being a skeptic in EVN-land, so we’ll just have to finish it and pleasantly surprise people :).

2014 broke my heart because we couldn’t participate in NaNoRenO 2014 (it was far from realistic). I want to enter NaNoRenO 2015…so…badly… *fist of determination* we will enter this thing. 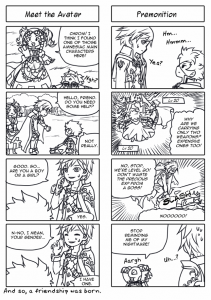 For those of you going to Dutch conventions, we’ve been working on a jokey Fire Emblem Awakening fanbook, which is nearly done. Here’s a preview page without tones;

And that’s about it! I hope 2015 will be awesome and that your end of the year is great as well! Best wishes from us.