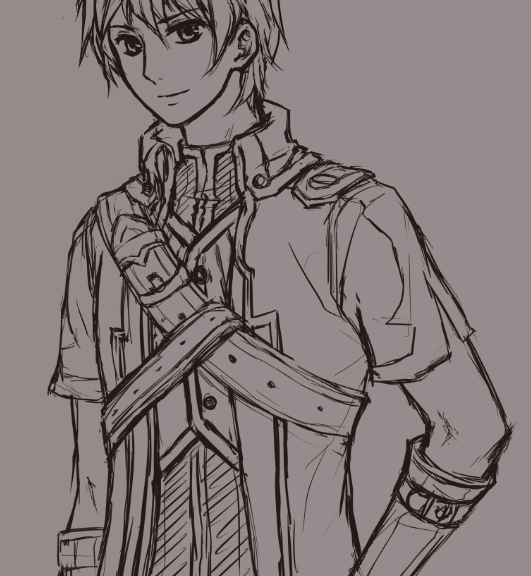 While November seems to try everything it can to halt our progress, we still managed to work on some things~

Sound effects will be completed soon, we have three (out of fifteen or something at most) music tracks done and all sprites are being neatly sketched. Since it’s a bit hard to talk about music and sound effects, I’ll just tell you guys a bit about the sprite-progress.

Sketches first
Not a single sprite is going to be finished (i.e. properly coloured and lined) before all of them and ALL poses and expressions are sketched. We have three reasons for doing this, the first being that it’s easier to make the sprites consistent if you do it this way (I noticed this while making Nanolife). The other reason is that Kiki can use these sketches to start coding, to see what should be added and if everything is all right. And finally, I am going to try out a new (for me at least) colouring style, so I don’t want to focus on two things at the same time when I need to colour them.

From rough to final sketch
When sketching the sprites, I have a lot of anatomy reference stuff opened next to my art program, ranging from photo’s of models to pictures of how the human muscles work. I can really recommend always using tons of reference to get an idea of how things work in real life. Also, this gives you a marvellous excuse to stare at bare chested (wo)men; it’s research, man :D!

Anyway, I usually go through about three sketches until I reach the final sketch. The first is just a bunch of shapes, the second is made up out of muscle-shapes/lines and the third is like the 2nd but with some unnecessary lines erased and details (clothes, hair, eyes) added.

Below is a 3rd rough sketch and a final sketch to give an idea. I sometimes sketch new poses on top of the previous one, but sometimes also next to it. *shrug*

After the sprites are sketched, I add some place-holder base colours so Kiki can see if she agrees with the colour scheme and check whether the light effects and other stuff she codes work well enough.

Since Lina is completely done, here’s what the final sketches look like:

And that’s all I can show/tell you at the moment. Next time I will try to have most of the sprites sketched, Kiki will start doing some real code-work (long live vacations~) and Triah will probably have a few more tracks done too.

Also, the day we can create a Lemmasoft work-in-progress topic is getting closer and closer~