In honour of this day, we wanted to bully Lloyd (the main character). All you need is water and ships :D! See, it’s this simple:

As for actual progress, we have some from three different angles!

First, Kiki has begun doing some simple coding such as dividing the script into scenes, adding the names, adding choices/jumps in the script and when to switch between novel and adventure mode.The first bit of coding is always kind of mundane, so she has my pity. 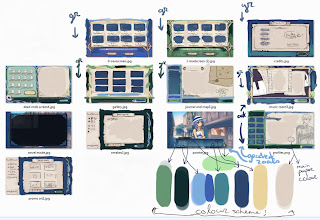 As you can see, I’m still working on the GUI. I wasn’t satisfied with the first colours of the GUI, so I took a screenshot, made a colour palette and doodled over it until it was all right. The menus match each other now~

Every menu is sketched/designed, although this screenshot is missing the choice-button, titlescreen and interlude/chapter images. Kiki says she’ll think up some cool button effects for the menus, so I’m really curious how everything will look in the VN~ I’ll work hard to finish this as soon as I can!

Music
It took us a while before we finally decided how and with whom to do the music, but a good friend (known as Triah) is helping us out now. While we’re still deciding on and messing a bit with the instruments, below you can find a small sample of Locus Magici’s music (used for fun and happy scenes).

And that’s all for now, back to work!