It’s already been a month since NaNoRenO, so that’s enough time to recover and pick up our work on our latest project; Locus Magici. However, since we haven’t done anything else yet save for writing more of the story (Anna is working hard on that one), today’s post will instead be the return of the tips section! Brought to you by me, the ever mysterious K-chan.

First, let us move back to 2010, when I was putting Firefly together. Not planning ahead on how to handle my resources, I pretty much threw everything together in one image folder with a few exceptions for stuff like the title screen images. The result? 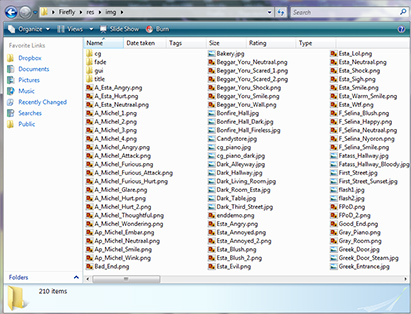 Yeah… I kind of regretted that one. Some problems that arose thanks to this:

When it was time for Nanolife, I decided to turn things around: 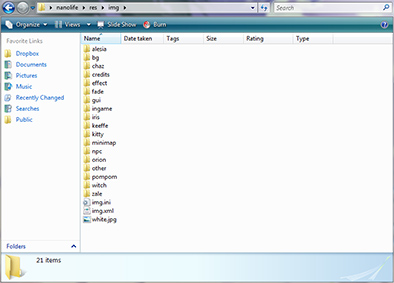 There, much better. Characters, backgrounds, fades, and various parts of the system all get their own folder now, making it much easier to work for me. Also, the names used in Nanolife were rather short, but otherwise I could have also worked with three-letter abbreviations (like kee/smi.png for the image path, instead of keeffe/smile.png)

I talked mostly about images now, but the same goes for scripts. Instead of putting everything in one master document, I like to split it up in multiple scenes, sorted by number. For example, ‘1.lvn’ or ‘1-description of scene.lvn’. Like images, it is easier to find and edit a specific scene, or see whether a scene is too long in comparison or not.

This seems like a pretty simple concept, but it saves quite a bit of time, at least in my case. At the very least, it’s enjoyable to see oneself developing tricks like these. Well, until next time, where hopefully we’ll have something to show related to Locus Magici :).