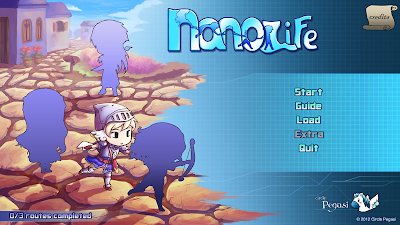 Synopsis
A boy has recently found a great MMORPG in the depths of the internet. Excited, he stays up behind his computer late at night, while a thunderstorm is roaring outside. However, just as he completed his character creation – thunder strikes!
All electricity and thus also his computer shut down at once, leaving him in the dark. Though sad, he has no choice but to wait for now. However, in the game, his character has already begun playing without him…
Specifications
Age Rating: 3+
Beware! Brush your teeth before and after playing!
Download
Installer — Windows XP/Vista/7
Application bundle — Mac OSX
Zip file — all platforms
Warning
Because of the very tight deadline we haven’t tested thoroughly on all systems, so please let us know if you find a bug.

System requirements
You will need Java version 6 or higher, which can be downloaded here.

—————————————————————————————————————
Yes! Yes! Oh hell yeah~ we made it!
That was the most horrifying month we have had in a long time. Next time, we’re definitely making something simpler haha. We didn’t even have the time to sleep or update this blog properly.
All right so what did we do?
Art
We made a lot of art for the graphical user interface, but the minimap has been simplified to only show the area’s name and a small picture for it, since it just didn’t work well with the 2D atmosphere we created.
Nevertheless, this was my first time doing such a big and strange GUI, so I’m satisfied with the results, especially since Firefly only needed a simple black transparent text box. It took a looong time to do though.
Story
Me and K-chan discussed the story and made an outline and flow charts before the writing even began. After that it was a matter of me typing at the speed of light and her and me doing a lot of proofreading afterwards.
Still, the script turned out to be double the size of what we originally planned – oops ^^;. I had a lot of fun writing it though, since it was a very novel way of telling a story for me.
Scripting
From what I heard and asked of her to do, scripting was hell for K-chan, but that’s probably because I gave her the final pieces of art and sprites so late ahaha… I have to admit though, she had to do a LOT of new things for this project too, from flying people to changing title-screens to little animations and what not.
However, she can’t fool me that it was 100% bad. I bet you she was secretly smiling with glee when mistakes made the characters rotate through the air while looking smug. Definitely.
Music
OK, the music was downright hell :’D! I was struggling with another deadline last night and only had this day left to do the music. Then, I OVERSLEPT. K-chan called me awake at 12:00. Why thank you, body! Couldn’t you hang on for a couple more hours? Dammit.
In the end I managed to make 1 simple track while I stole some from our other work to fill most of the gaps. We finally added 3 other creative commons tracks after looking around for a good couple of hours too.
Music on the last day? Never again man.
And that’s about it. We hope you enjoy it! Now please excuse us while we go sleep, game, eat and blissfully do nothing at all. Aah bed, I missed you too <3<3<3~
~Anna