Today let’s look at our progress for Nanolife – our NanoRenO project. As expected, we are perfectly on schedule and this post is totally not late because we were working our asses off to meet ridiculous deadlines. 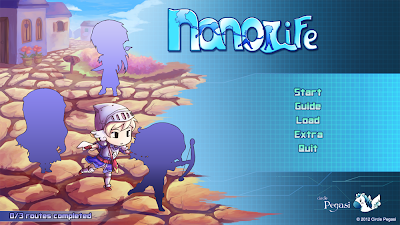 This is the title screen, I spent way too much time on it and you will like it dammit. You can see three silhouettes, which will appear as people once you complete their routes. Since we like to be captain obvious, we also tell you how many routes are completed in the lower left corner of the screen.

As you can also see, we added a “guide” feature in our visual novel. It will show you all those awesome short-cuts and features to read through Nanolife like a pro! Last but not least, our circle’s logo will be click-able and send you to our website because we can.

Graphical user interface (GUI)
Apart from the script, the GUI has the most progress so far. We’ve made a MMO-like interface which has:

The only things still left are to draw the different maps for the minimap, the classes, skills and items icons. K-chan has most of it coded already too.

I would show you a screenshot, but the only one I have is with a background of K-chan’s amazing, jaw-droppingly, gorgeous art which would change the art world forever!… and which was drawn without a tablet in one minute. Oh well, it’s probably cooler to see it when it’s done anyway.

Sprites
I sketched them and inked two of them and I have many, many left to do… and the deadline for that is Sunday. In other words, this weekend Anna is screwed.


Conclusion
We’re slightly behind schedule, but the toughest parts are done now. We’ll continue working hard to make this!