It’s the 1st of Marth – also known as the kick-start of NaNoReNo!

For those of you not in the know, this is basically a visual novel making month inspired by NaNoWriMo. The challenge is to start and finish an entire visual novel in one month – March! Planning and preparations are allowed before March, but the content of the visual novel should only be done within this month. Results are then posted on April 1st.

So here we are! We will participate in this event with our own shiny new project, Nanolife! Everything in it will be made by me and K-chan, since we need to be extremely flexible with this project and we’ll probably have to work our asses off. Another reason is that it’s going to be absolutely free~

Now onto the fun stuff! First off, the rough sketch of our logo:

Synopsis
A boy has recently found a great MMORPG in the depths of the internet. Excited, he stays up behind his computer late at night, while a thunderstorm is roaring outside. However, just as he completed his character creation – thunder strikes!

All electricity and thus also his computer shut down at once, leaving him in the dark. Though sad, he has no choice but to wait for now.

However, in the game, his character has already begun playing without him…

Further information
As you can see from the synopsis, this visual novel will focus on adventures in a MMO world through the eyes of an AI. We’ll try to make it look as MMO-ish as we can, so think of a concept like this (only, you know, not crap): 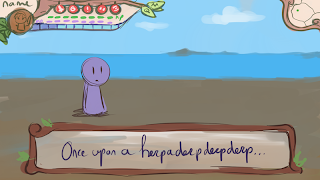 It will have choices and three routes with one ending and no bad ends (I cannot harm chibies), 1920×1080 resolution (Full HD, hell yeah) and maybe small background animations where I can think of them.

We’ll update with our progress every week, but here’s a rough schedule to give you an idea:

… that code better be god-tier, K-chan.

Anyway, we hope you’ll enjoy the ride! Let’s do this!