Today, your usual host Anna has been replaced by her mysterious assistant.Right now, we’re not going to discuss handy tips or show cool stuff. Instead, I’ll show the beginnings of our new project… with delicious bad programmer art, fufufu~ Now you can learn how to make a good test environment while not being able to draw at all.First, let’s discuss backgrounds. Most of the time, Google can be used for simple stuff like rooms and hallways. However, with more unusual or important backgrounds, we need to make them ourselves. Thankfully, I don’t have to worry about it actually looking good – as long as the important elements are in place, Anna will make something awesome out of this… eventually. 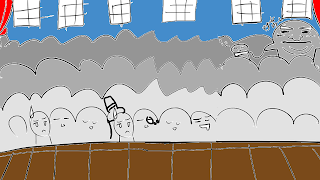 Let’s look at the characters next. This is a little bit more work, since I need to think out some important stuff, such as the characters’ expressions and their general poses (which makes Anna’s life much easier when she starts working on the art). Still though, you don’t want to spend too much time on this, so I can pick an existing sprite, do some quick editting work, and ignore the large gaping hole in their necks and edit them into the game.Also, the sprites may appear somewhat familiar >:3… 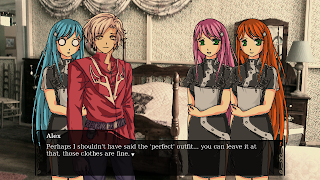 There are some CGs as well, but since those are fully drawn by myself, I would die of shame your minds cannot comprehend them yet at this stage.
That was a rather short update, but it was fun showing you behind-the-scenes stuff like this. Now it’s time for me to go back to work /o/!

947 thoughts on “The Legend of Placeholder Art”