One fateful night, I sat up in bed, grabbed my notebook and started writing incomprehensible things.

In other words, hell yeah! Finally! Time to introduce a new project! It’s called A Song of Truths and Dares * A Game of Spies… 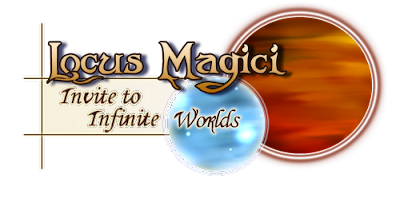 Tadah~ The logo was made to go onto a darker background, so you can’t really see everything well here, but it shows the general idea.

After a tiresome mission on another continent, the high spirited spy Lloyd is happy to make his way back home. As a way to ensure the safety of himself and the troublesome items he brought back, he meets up with two of his fellow spies.
But because of their strange behaviour, he starts to expect they might be here for reasons other than just his safety – and maybe not even that.
Lloyd soon finds himself thrown into problems and even worlds he had never considered possible to exist. He will need to muster all of his wit and skills, in order to survive and come to the bottom of this all.
Note: They’re spies this time, not thieves, there’s a very significant difference there! Or so I’m trying to make you believe.
Specifications so far
Characters 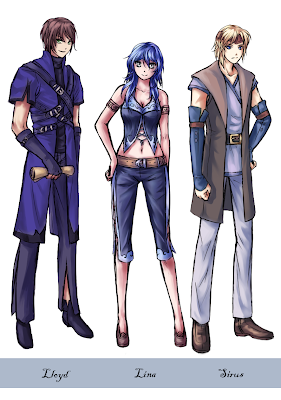 Mind that these are just the character concepts, so the quality isn’t the same for the sprites and rather sketchy here. Anyway, from left to right we have…
Lloyd – the protagonist
A 19 year old, high spirited spy who enjoys his job and is actually pretty nice. Much like his fellow spies, Lloyd was raised in a special institute for spies and afterwards has been working as one his entire life – even though he doesn’t always act the part. His most recent mission is quite troublesome, so he can’t wait to get home and get it over with.
Lina

A 20 year old spy whose tactics and strategies in work are of a slightly different and more… mature nature than Lloyd’s. She and Lloyd began working together five years ago and have been friends – or perhaps a little more – ever since. However, when the two meet again she seems unusually restless.

Note: I have never drawn a woman with such a daring outfit and large breasts before. I blame Xenoblade for everything.
Sirus

A 17 year old spy who takes his job rather seriously. He used to work for a different lord, but then left and started working for Lloyd two years ago. Even though Sirus is the youngest of the three and Lloyd’s subordinate, their relationship is pretty casual.

There are about 3 or 4 other characters (who aren’t even blue! *gasp*), but these will do for now.
Progress so far
Outline: 100%
Script: 5%
Coding: 0%
Character concepts: 50%
Art: 0.5% (I demand that 0.5% because of the logo :V!)
Music: 0%
As you can see, we’ve completed the outline and I’m busy writing the script. I don’t know how long it’s going to be, but my (highly detailed) outline is about 12 000 words…. oops? I’ll abuse the rest of this month as much as I can to write more of the script, since it’s the NaNoWriMo month after all :).
Either way, I’m really excited for this project and can’t wait to you show more, since it’s going to use a style and theme which is perfect for a visual novel. It will get really artistic and we’ll be trying out some new things (like little animations), but of course we’ll do our best to make it a great visual novel to play as well <3!
~Anna
P.S. I don’t know who it is, but someone has been updating vndb.org with our works (even the most recent demos!). Whoever you are, you are a sweetheart, thank you <3!

P.S. #2 Sorry if you got spammed with our last two Firefly blog posts. I didn’t know the RSS feed would update just because I added a tag ;_;…