Firefly was originally a kinetic visual novel made for a convention in the Netherlands (and later released online as well). However, as this was our first visual novel ever with a brand-new game engine, we encountered some problems here and there. Therefore, with the comments we’ve received as well as our updated game engine, we’ve decided to do a little re-release.

Important – This is more like a free update than a new release – those who bought the old version will be updated with the new one free of charge, while the price of the new version will not increase for new buyers. If you bought Firefly online before, we will send it to your e-mail address. Those who bought it on a convention will be notified later on with more information – we’ll think of a way to give you guys the update as well.

Windows & Linux – For those who want to take a look, the second edition demo can be found here:

Mac – For those with a Mac, a specific version for you guys can be found 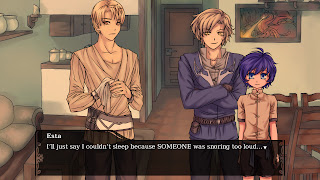 And last but not least, we’ve also corrected a number of typo’s, fixed some small visual bugs and improved one of the background music files.